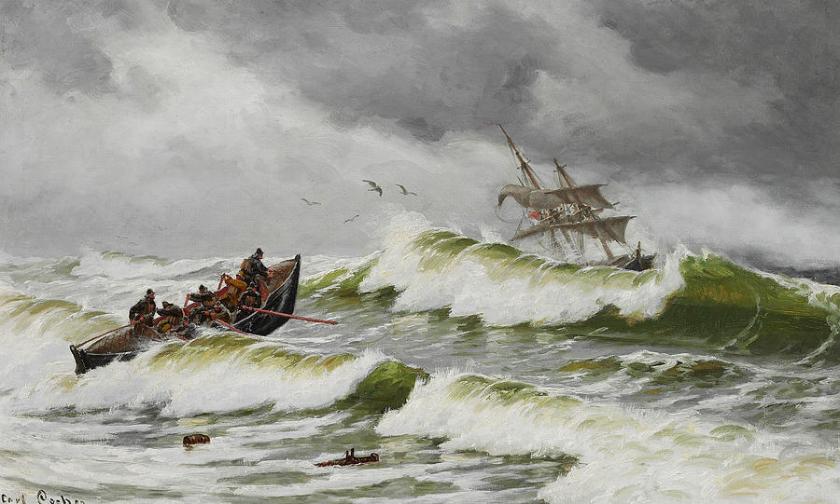 I recently published an academic paper about island refuges in extreme pandemics with my co-author Nick Wilson. The paper has become the focus of media attention, including articles by Newsweek, Fox News and IFLScience.

Unfortunately, the key argument of the paper has been misconstrued in several reports. The headlines included click bait such as, ‘If A Pandemic Hits, This Is Where Humanity Should Go To Survive’ and ‘Scientists rank safest spots to flee to if apocalyptic outbreak begins to wipe out humanity’.

The conclusion of our argument was almost the opposite. We argued that preparations could be made ahead of the fact, so that the designated island refuge(s) could be closed off almost immediately when signals indicate a catastrophic pandemic is emerging. There would be no fleeing to the ‘lifeboat’ allowed.

In fact, the metaphor of a ‘lifeboat’ is misleading, because people scramble for a lifeboat when the disaster strikes. Our argument (which I explain below for those who have not read our paper) is that the islands most likely to be able to reboot a flourishing technological human culture after the event, should be identified ahead of time, and plans enacted to prevent people arriving when the catastrophe strikes (i.e. through border closure measures).

In the literature on catastrophic and existential risk mitigation, the concept of an ‘information hazard’ is the idea that some information when spread actually increases the risk of a catastrophic outcome. The ‘run to the island refuge’ approach is an information hazard. If people actually behaved like this, it would undermine the effectiveness of the refuge, and increase the probability of (in this case) human extinction.

Our argument is about preserving technological culture, ensuring the continuation of the ‘human project’ and the flourishing of future generations. It is not about saving people around the world at the time of the catastrophe.

The fact that any particular people might survive the event is incidental to the bigger picture that some people could survive and ensure a future full of human beings and full of technological culture.

We identified three promising options for such an island refuge to preserve humanity. And one might argue that it is not fair on the diverse cultures of the world if just Iceland or just Australia, for example, survive the catastrophe.

However, there is nothing preventing plans for a designated refuge to include representation from all the worlds people, perhaps a system of rotating work visas, so that the refuge can host, at any given time, a sample of the members of each of the world’s jurisdictions. Whoever happens to be there at the time of the catastrophe would then effectively get ‘locked in’ and would represent their culture as the world is re-booted.

Providing such visas and hosting these diverse people could be an undertaking that the designated refuge nation(s) take on, perhaps in lieu of providing development assistance to the rest of the world, so that the refuge nation is not unfairly burdened should the refuge never be needed (which is also a likely outcome).

Our paper is only the first step in a conversation about how the world might mitigate the risk from extreme pandemics, and we encourage other ideas so that we can little by little implement strategies that reduce the probability such unlikely but devastating events can destroy humanity.

The risk of human extinction is probably rising. This is because, although the background risk from such natural events as supervolcanic eruption, or asteroid strikes has remained consistent, the risk from technological catastrophes rises with our technological prowess (think nuclear, nano, bio, and AI technologies) which is by definition unprecedented in human history.

There are a number of reasons to work to preserve the future existence of humanity. These include the value of the vast number of future human lives, the worth of continuing key cultural, scientific and artistic projects that span long periods of time, and the cost-effectiveness of mitigating disaster.

We assume that the continuation of large and advanced civilizations is more valuable than the persistence of only a handful of subsistence societies.

A pandemic or perhaps more probably multiple pandemics occurring together poses a risk to the existence of humanity. The WHO hypothesizes about ‘Disease X’, a disease about which we yet know nothing, and which could emerge from increasingly accessible biotechnological manipulations. Such an event(s) would fall under Nick Bostrom’s concept of ‘moderately easy bio doom’, where a small team of researchers in a small laboratory, working for a year or so, might engineer a catastrophic biological threat. This would only need to occur once to threaten the entire human species.

The probability of such an event is unknown but is likely to be non-zero. A survey of experts in 2008 concluded on the basis of expert opinion that an existential threat level pandemic has a 2% chance of occurring by the year 2100. Two percent times a 10 billion population, means we are looking at an expected human life loss of 200 million people. Reducing the probability of such an event even by half a percent would be hugely worthwhile, particularly if it can be done with existing resources, and within existing governance structures.

One way to mitigate the risk of a pandemic killing all humans, is to designate some location as a refuge (just as with nuclear fall-out shelters in the cold war), which is quarantined (i.e. no one goes in or out) as soon as the triggering event is observed. Land borders are easily crossed by those infected with a disease, but islands have escaped pandemics in the past.

Key features required by such an island refuge are: a sufficient population, skills, and resources to preserve technological culture and rebuild society, and self-sufficiency and resilience to ride out the crisis.

We set about trying to identify the most likely locations (at the level of island nations) that satisfy these criteria. To do this we formalized a 9-point scoring tool covering: population size, number of visitors, distance from nearest landmass, risk of natural hazards, infrastructure and resources (using GDP per capita as a proxy), energy and food self-sufficiency, political stability and social capital.

When scored on our 0-1 metric, Australia, then New Zealand, then Iceland appear to be the most promising island refuges.

A lot of work yet remains to be done. Perhaps there are better interventions to protect the world from an existential level pandemic? Perhaps some other factor(s) is/are critically important to the success of an island refuge that we have not yet included (strong military, the presence of universities or server farms for the world’s knowledge, or some other factor)? How long could the optimal islands hold out? Is there some threshold of population that is essential to ensure that key skills such as nuclear physics or neurosurgery are preserved? We now encourage discussion and debate around these (and many other) issues.